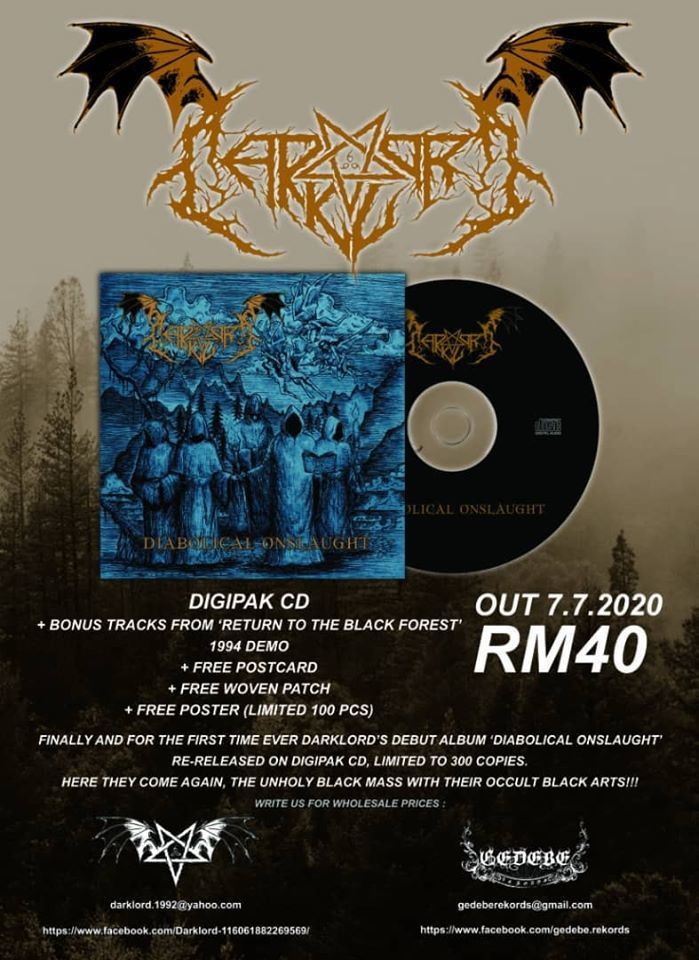 In 1993…Ronjinz and Zaidee calls it quit from Darklord. Then enter the blood brother,
Black Raven of Mayhemic Curse on guitars and Seventh Warrior of Armageddish on bass & keyboards.
In this period, Nocturno Prince of Black Abyssia was handling all the vocal jobs for Darklord.
A plan for having a demo took in, they start to compose and rehearse some tracks for the demo.

Darklord first demo ‘Return to the Black Forest’ finally was recorded at Amerah Studio, Pertama Complex,
Kuala Lumpur by the end of 1993 and later spread to the mass on a tape format early 1994.
The demo was engineered by Mon, featuring 6 tracks including intro and outro.
Few hundred copies were circulated, the demo received mixed feedback
from metal followers, zines and labels. There is no live appearance or shows for Darklord
because they don’t like it.

In 1995…Darklord was put to rest due to various commitments from each member.

23 years later…Infernal Lord of Nocturnal Kingdom (Lord Inferno) decides to resurrect Darklord.
Some new entities are summoned to join Darklord as well, some new tracks have been composed
in between 2017 - 2018. A complete new lineup for Darklord is finally revealed to the mass…
Lord Inferno – bass, Lordshaman – vocals, Nekrademus – guitars, Tarabath – drums and Moondusk – keyboards.
This lineup will be appeared in Darklord debut full length entitled ‘Diabolical Onslaught’