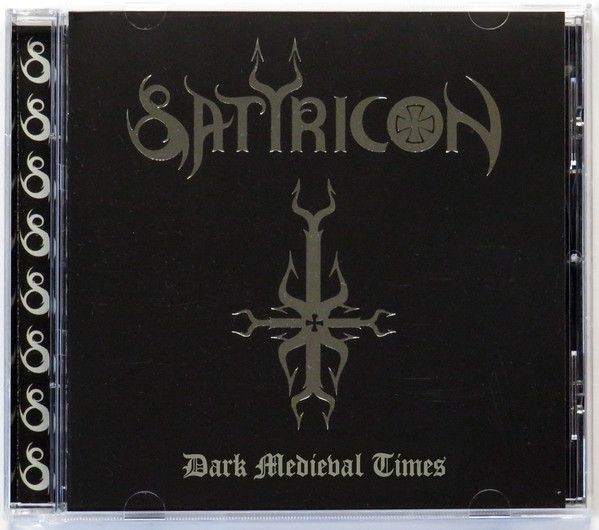 In 2007 Irond re-released early Satyricon's CDs with changed artwork in the same style; Satiricon logo and cross embossed and silver plated on a matte black background. Original front covers were moved to inner sides of the back covers.

Packaged in a jewel case, a 6-page booklet (folding).

Introduction (from track 1) is from When's "Death In The Bluelake"
A majestic hail in honour of Bard Faust and our spiritual brothers.

Dark Medieval Times is a concept based upon The Middle Ages, Svartedauen 1349, and when the Vikings ruled the Northern land. The music was created in my darkest hours and has its source in overflowing medieval belief. Still the music is timeless and independent. Inspiration is taken from the great landscapes of Norway, and both lyrics and music are keys to the ultimate forces of time. Open the gate to Dark Medieval Times and bring forth to the domains of Satyricon, two great spears and a flag of dominion and hate. Dark Medieval Times is dark medieval music for the true ancient Vikings of Norge.