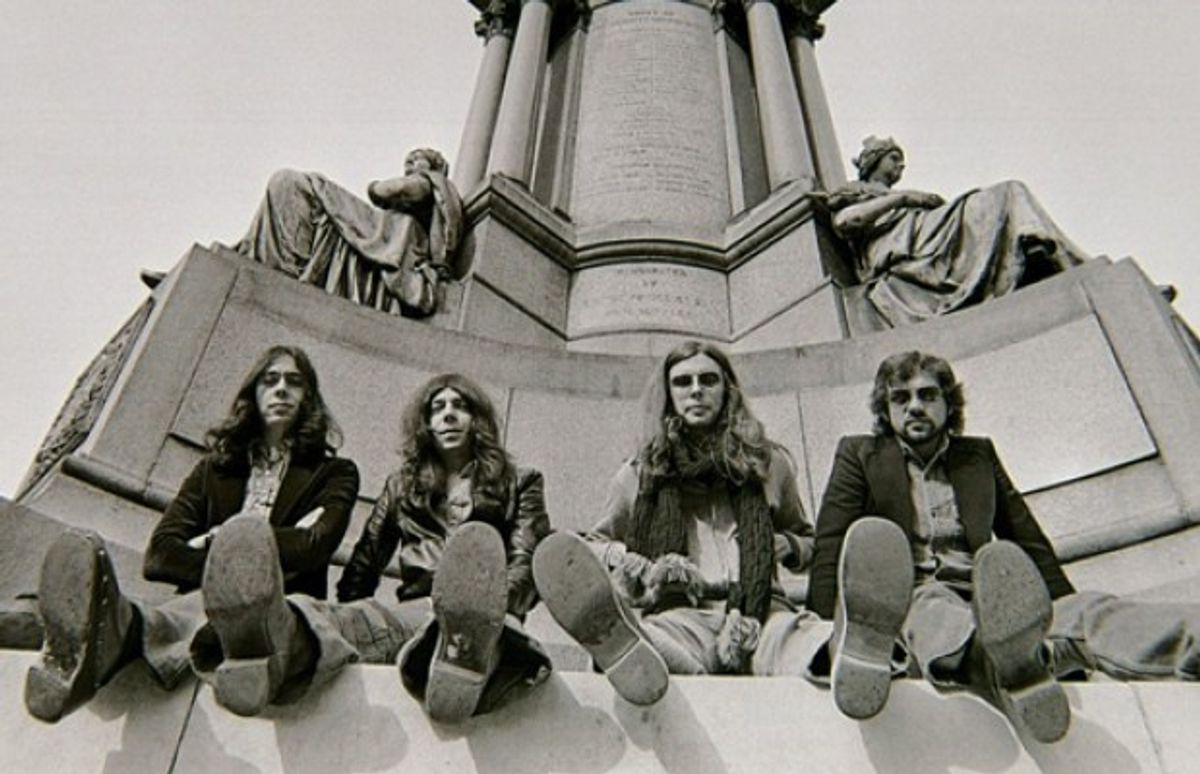 Probably Camel’s most popular album and their best work, the group’s second effort Mirage both expanded and improved upon their self-titled début. Having truly found their sound and gained incredible confidence and daring in their writing and playing, this progressive classic opens strong and ends even stronger. “Freefall,” with its booming opening, outstanding guitar lines, seemingly effortless mood –and tempo changes and fitting vocals, is a definite statement about what Camelcould unleash. Which, when listening to Mirage, was something quite astounding.

Split between the three vocal tracks that make up the beginning, middle and end of the album are two superb instrumentals. The shorter, more laid-back and playful “Supertwister” features a first appearance of Latimer’s abilities on the flute, introducing a new element that would play a part in Camel’s sound on many subsequent albums. The longer “Earthrise” is a free-flowing jam that features some fantastic interplay abilities between the quartet and is a perfect example of their strong chemistry.

Mirage’s most compelling moments are however its two epics. The middle track “Nimrodel/The Procession/The White Rider,” is once again full of signature Camel moments: Latimer’s gorgeous melodic guitar lines, relaxed vocals, Ferguson’s typical deep bass sound, and a smooth flow that makes it seem shorter than the nine minutes it actually takes. The group’s storytelling ability is most prominent here. Latimer wrote the song about the Gandalf character from The Lord of the Rings (those fantastical kind of themes were really hip among the rock bands of the era, after all), which is easily derived from the lyrics: “Once he wore grey/he fell and slipped away/From everybody’s sight/The wizard of them all/came back from his fall/This time wearing white.”

In traditional manner, the best epic is of course saved for last. Lady Fantasy, written together by the entire band (most of the band’s compositions were written by Latimer and Bardens), is one of the true highlights of Camel’s career. The lyrical content may actually be a little cheesy, but flows wonderfully with the music. Each section is extremely well though-out and Latimer’s playing, especially his highly emotional lead that recurs throughout the song, is to die for. These 12 minutes top off the accomplishment that is this record with proud determination, and are a reminder why it is held in such high regard. Mirage is a definite progressive classic, and should be owned by anyone who pronounces himself a fan of the genre.

Camel’s fourth LP Moonmadness closely rivals their second one Mirage: they are similar in the fact that they both feature some of the most energetic, original and awe-inspiring compositions the group ever created, and of course both appear in their classic era. Despite the obvious similarity in the overall vibe though, Moonmadness is also quite different. Mirage contained three vocal tracks, two of which were epics, woven around two instrumentals. This album is spread out a great deal more, the average song length being about five and a half minutes, and that makes it a smoother experience altogether.

The short “Aristillus” will, as is the sworn duty of any good opener, grab your attention immediately. The bumpy tune is heavy on synthesizers, creating a spacey sound that works very well and shows a new side of Camel; one that shows throughout the rest of the album as well. Another feature that starkly contrasts Mirage is the inclusion of several gorgeous melancholic tracks. The soothing flute and voice of the first part of “Song Within a Song”; the short and mystical “Spirit of the Water”; the floating atmosphere of “Air Born”: Camel once again takes you places.

For those looking for the more vibrant type of progressive, however, worry not. “Chord Change” is another classic Camel mood-changer (as its title already implies), and goes through some rockin’ passages. “Another Night” is even better, featuring a main riff closely bordering on hard rock, some of the best vocals on the album, and, top really top things off, both a guitar and organ solo near the end of the track. The best moment is however the instrumental closer “Lunar Sea” (also known as “Lunacy”), using whacky synthesizers, aggressive bass playing and the sound of blowing wind in its last minute to wrap things up in a truly unique manner.

Without a doubt, Moonmadness is one hell of an essential progressive album, very closely rivalling Mirage for Camel’s magnum opus. The group’s sound is not a bit outdated, still able to amaze the ears of new listeners today. The record has a strong sense of energy, melancholy, and a unique atmosphere that truly makes it stand out, not only amongst the band’s own other works, but the works of other artists in general.

Possibly the most appealing quality of this record is the amorphous atmosphere and use of themes. Throughout the record, the moods change very often and still retain the same overall ambience, one of nature, all her seasons, and all the fog, wind, and oak that goes with it. The atmosphere is able to do this because the band implements a lot of woodwind instruments and, thankfully, restrain from doing any senseless prog jams. There’s hardly any room to do so what with each song being no less than two to five minutes, hence the sixteen tracks. The use of themes is also important to this conception because, like any good concept piece, the multiple themes are malleable enough to be used more than once and employ alterations of how the theme is emotionally presented as illustrated by the mad happiness of “Rhyadar” compared to “Rhyadar Alone.”

Because the album is based on a book, you will find no lyrics whatsoever. This instrumental record does contain a very small handful of vocals but are merely performing na na na’s, and truthfully this record would be terrible with vocals as the music does a breathtakingly good job at storytelling, which works well since you can either read the book or create your own story. The title track is a good example of how the album paints images with incredibly inspired guitar leads and dual drawbar organs, and soon enough you will be questioning whether Koji Kondo was inspired by this record due to tracks like “Friendship” (Kolkiri Forest soundtrack anyone?). It flows straight into “Migration,” probably the one “progressive” sounding track with poppy organ chords and freeform jazz drums. “Flight Of The Snow Goose” defines layers with fast piano movements, very upbeat drums, octave guitar leads, “Dunkirk” shines above the rest with its characteristic composition with walking basses, prominent horns, a signature guitar line, and marching snares acting as a crescendo with the organ’s volume, and “Epitaph’s” drone of strange percussive sounds and low rumbles flows seamlessly into the beautiful piano solo of “Fritha Alone.” The album covers so many sounds it’s ridiculous.

With the grand closing of “La Princesse Perdue” and “The Great Marsh,” within the frantically excited violins a nostalgic organ solo preceding a slower tempo for a bittersweet, almost orchestral finale and the surprisingly dark texture to silence the record, it’s hard not to be impressed by the sheer audacity and creativity you have just been subjected to, but honestly there’s no real way of describing this record in words. Words are the biggest barrier in the world, and because of this I can only implore that you let the album speak for itself.

Though underdeveloped as many debuts are, the band’s first album gives a strong hint of what’s to come with seven very worthy tracks. If you compare it to Camel’s three classics, something immediately notable is how confident the boys became from Mirage onwards. This, however, is not necessarily a bad thing for the album, which sound positively laid-back and welcoming; don’t expect anything of the “Freefall” calibre (if you’ve heard Mirage). The hard-rocking closer “Arubaluba” is the only real moment you’ll find to the band going all out, more of these energetic moments being spread throughout the record in only a modest sense.

“Slow Yourself Down” is pretty indicative of the album’s main sound. Going through several mood changes, it first welcomes you with Latimer’s relaxed vocals (he’s a far better guitar player than he is a singer, but luckily seemed aware of this and used his voice little but effectively), but progresses into a brilliant instrumental display that leaves no doubt to the talents of the musicians that stand behind Latimer. Especially Bardens proves his mastery of the organ, bearing no shame to the Jon Lords of his generation, and Ferguson’s bass and Ward’s drums have absolutely no intention of going by unheard either.

“Separation” and “Curiosity” feature similar moments of such energetic virtuosity, but “Mystic Queen” and “Six Ate” float along like a pleasant dream. The real highlight of the album comes with “Never Let Go,” which acoustic opening was actually the basis for Opeth’s “Benighted” (Camel being one of Mikael Åkerfeldt’s major influences). Latimer’s vocals are at his strongest here, the instrumentation is beautifully moody, and the song concludes with an excellent guitar solo. A track that best shows the enormous potential Camel had in 1973.

Because yes, in the three years that followed, the band would release their three most acclaimed albums, realizing that potential they had going. This debut is not just another example of a stepping stone, but an accomplished work in its own right. While not as good as the group’s later albums, it is a most excellent start and an essential Camel release, as well as a very good starting point to get into their wonderful music.